Moving a Mountain of a Dish by Patrick L. Barry 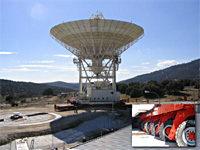 Your first reaction: “That’s impossible!” How on earth could someone simply pick up one of NASA’s giant Deep Space Network (DSN) antennas-a colossal steel dish 12 stories high and 112 feet across that weighs more than 800,000 pounds-move it about 80 yards, and delicately set it down again?

Yet that’s exactly what NASA engineers recently did. One of the DSN dishes near Madrid, Spain, needed to be moved to a new pad. And it had to be done gingerly; the dish is a sensitive scientific instrument full of delicate electronics. Banging it around would not do.

“It was a heck of a challenge,” says Benjamin Saldua, the structural engineer at JPL who was in charge of the move. “But thanks to some very careful planning, we pulled it off without a problem!”

The Deep Space Network enables NASA to communicate with probes exploring the solar system. Because Earth is constantly rotating, a single antenna on the ground can communicate with a probe for only part of the day, when the probe is overhead. By placing large dishes at three locations around the planet-Madrid, California, and Australia-NASA can maintain contact with spacecraft around the clock.

To move the Madrid dish, NASA called in a company from the Netherlands named Mammoet, which specializes in moving massive objects. (Mammoet is the Dutch word for “mammoth.”)

On a clear day (bad weather might blow the dish over!), they began to slowly lift the dish. Hydraulic jacks at all four corners gradually raised the entire dish to a height of about 4.5 feet. Then Mammoet engineers positioned specialized crawlers under each corner. Each crawler looks like a mix between a flatbed trailer and a centipede: a flat, load-bearing surface supported by 24 wheels on 12 independently rotating axes, giving each crawler a maximum load of 194 tons!

One engineer took the master joystick and steered the whole package in its slow crawl to the new pad, never exceeding the glacial speed of 3 feet per minute. The four crawlers automatically stayed aligned with each other, and their independently suspended wheels compensated for unevenness in the ground.

Placement on the new pad had to be perfect, and the alignment was tested with a laser. To position the dish, believe it or not, Mammoet engineers simply followed a length of string tied to the pad’s center pivot where the dish was gently lowered.

It worked. So much for “impossible.”

To find out more about DSN Go here: DSN

This article was provided by the Jet Propulsion Laboratory, California Institute of Technology, under a contract with the National Aeronautics
and Space Administration.

The Spectrum cover this month shows the Mich-Whit team exploring the Moon. A lead in to this Months Lunarian Corner.

Part of the problem in trying to figure out what you are looking at is that the craters and other features will look very different depending on the lunar phase (i.e. position of the terminator relative to the object you are looking at.) Don’t believe me? The next time the moon is near full, go out and take a look at it. Use high power to cut down on the light. And then try to figure out just what the heck you are looking at. It’s tough. Real tough. Most people have heard of the lunar feature called the Straight Wall (Rupes Recta, Rukl chart #54). Is it a straight black line or straight white line? That all depends on when you look at it. And sometime it will disappear from sight completely! That is also true with features like lunar domes. I have seen domes practically disappear right in front of my eyes in a matter of hours. Now you see them and now you don’t. Welcome to the fun filled world of lunar observing.

What about the perpetual complaint of observers that the moon maps are not oriented correctly with the way the moon looks in their telescopes? Depending on the number of reflections in your telescope, the image can be flipped top to bottom and even left to right! How in the world are you supposed to cope with that? Well, personally I have found that with a little bit of practice it doesn�t bother me which way the map is oriented, but then I used to use a finder scope that had a right angle prism on it, so I am probably not a good person to judge what is hard in that respect. It is true that they publish moon maps that have top and bottom switched and even some with left and right switched. But it absolutely drives me nuts to see large moon maps printed with south at the top. To me, truth is the way it looks to your naked eye in the sky.

But the great thing about Antonin Rukl’s Atlas of the moon is that you will be able to make the moon maps be however you like. How? You are going to be scanning in the entire atlas. Why? Because you are going to be constantly drawing and making notes on the individual maps (for those who will be actually doing the techniques I will be teaching you). It is much easier to be doing that on copies. Plus that way, you can use any one of the numerous programs out there to flip the image top to bottom and even left to right before you print it out, so the map will be perfect for your telescope.

So, the first homework assignment for the ‘Lunar 101’ class will be to get your hands on a copy of Antonin Rukl’s Atlas of the moon. Start scanning in the pages (or find somebody who has already done that) and print out the pages so they look like the moon does through your telescope. But what if the names are backwards? Then you can print out a page where they aren’t and use that for reading the names correctly, and the other one for the telescope work. Two of the most important maps to print out are the ones that show how the moon is divided into the individual maps in the atlas (so it is acting like a table of contents). You need to practice looking through your telescope, looking at those large scale maps, then flipping to the close up map and identifying what it is you are looking at. Right now just try identifying the large craters. You are just getting the practice you need to go from the telescope to the individual Rukl map. The next time I will be giving you specific targets to go and find.

Next time we will be talking about some more techniques that you can practice to help improve your lunar observing skills (and you will be seeing even more reasons why you want to be able to print out multiple copies of the Rukl charts). So sharpen your pencils (you will be needing them next!) and go out and start observing the moon. The skill you need to develop before next time is for me to be able to say Go to the area shown on Rukl chart #XX and you can go out and point your telescope right to it.

Here’s to clear skies and moonlit nights! See you next time!

Hello members and welcome to my attempt at adding to the newsletter. I’m going to call this “Brads Observing Challenge”. I will try to pick a few objects that some of you have undoubtedly already observed and some that you may have overlooked yet are a nice delight in the eyepiece. They won’t be hard to locate (especially if you have GOTO capabilities!) but may give your map reading skills a workout. And perhaps the chance to perfect the starhopping technique. I’m not going to bore you by adding the co-ordinates, I’m assuming you have access to star charts and software programs!

I will class them as easy, moderate, and challenging. Some will be practically naked-eye and some will require steady, clear, DARK skies but you should still be able to locate them in a 6 inch and larger scope rather easily. That’s what I’ve used to see most of these objects. Many will even be easy with much smaller scopes. Here is my list for February:

EASY– NGC 2264 Christmas tree cluster in Monoceros. You can actually see the shape of a pine tree. 2 naked eye bright stars form the trunk. The 14th mag Cone nebula juts out from the trunk like its roots. It is a real challenge to see though.

I think EVERYONE has seen this object. Very beautiful at higher magnifications. They don’t come much finer than this folks!!

NGC 2158 in Gemini. Quite faint tiny compact open cluster situated right beside M35. The glare from M35 almost drowns out what I think could pass for a distant globular cluster. You can just barely separate any stars in this one.

CHALLENGING– NGC 2419 the intergalactic wanderer in Lynx. It’s a globular cluster 300,000 light years away. It’s listed at 10.4 magnitude but still quite easy to locate. The trick is trying to resolve this puppy into pinpoint dots!

Trapezium cluster in the Orion nebula. The challenge is to see how many stars you can visualize. There are 11 stars involved in this cluster but they dip into the 17th mag range. This will require extremely steady skies but at least 6 of these stars can be seen in a 4 inch scope with patience.

O.K. give these objects a try and I’ll entice you next month with a few from the realm of the galaxies. Brad

Please note this very interesting event. RS Oph is currently an early morning object and normally 12th mag. It is now naked eye between 4th and 5th mag. The outburst has been confirmed. This is the first outburst of RS Oph in 21 years! It last peaked on
January 28, 1985 at magnitude 5.4. The first stage of the decline then lasted 38 days and it had declined at an average rate of 0.1 magnitudes per day. Within 111 days it had returned to its normal state.
Visual, PEP and CCD observations are needed. Please submit observations
to the AAVSO as 1744-06 RS Oph.
This is an opportunity to see a
very rare and storied star in performance. Read more here: Outburst of RS Oph