Hello everyone. This month I would like to talk about SuitSat-1. SuitSat-1 is a spacesuit-turned-satellite as described by NASA. The suit is an ordinary Russian Orlan space suit, which has reached the end of it’s lifespan. It is carrying inside of it a radio transmitter along with sensors and materials created by students (These materials include such things as creative artwork, student signatures, class and group pictures, and logos of schools or scout troops.) from all around the world. The international space station has released it on a spacewalk the evening of February 3, 2006 . It was launched on a trajectory that will cause it to de-orbit, re-enter the earth’s atmosphere and burn up within a week or two.

The SuitSat-1 transmitted a voice recording of children speaking six different languages (English, French, German, Spanish, Russian and Japanese) that could easily be picked up by an ordinary VHF radio or a regular Ham radio.       It was transmitted on Frequency 145.990 MHz FM.       Using an external antenna would make it much easier to hear it longer during each pass. If you heard it, you could say you heard a voice from space, right?       How would anyone believe you?       Well, anyone who receives the voice signals or captures the commemorative picture Suitsat-1 beams down can receive a certificate.       Students who find the special words (In the different languages) will receive an additional award.

So, if you think about it, amateur radio operators received the transmission and heard a voice of a child that was coming from a space suit that�s floating around the earths orbit. However, after two orbits of the earth it STOPPED transmitting. Perhaps it was caused by the batteries failing in the cold environment of space.

YCAS is proud to welcome new members Jay Nelson, Patricia Nelson,Joseph Allulis. We look forward to seeing you at the YCAS meetings.

Be sure to check out Matt Hollinger’s YCAS movie night web page by going to YCAS schedule/movies.

The Lunarian Corner
by Mike Wenz
Finding your way around on the moon. 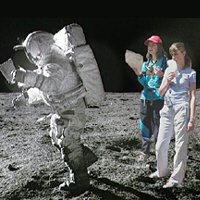 One of the lessons learned from the Apollo lunar landings was that it is extremely difficult to find your way around on the moon. All of the astronauts had tremendous difficulty trying to judge distances and reconcile what they were seeing on the ground with the maps they had. Obviously we are going to have to come up with some better techniques for lunar navigation as we return to the moon in the (hopefully) near future. Maybe the Mich-Whit team can give them a few pointers, or better yet, go up there and show them how to do it themselves.

But luckily, most of us just have to deal with trying to identify the myriads of craters and features that we see on the moon through our telescope with one of the many different moon maps available for us to use. The moon is one of the few astronomical objects where map reading skills are important. Not only important, but critical to figuring out what it is you are seeing on the moon. And it is a skill that takes lots and lots of practice to perfect. What I want to do in these series of articles is teach you some of the lunar observing techniques that will help you perfect your map reading skills and turn you into a great lunar navigator (something which will look very impressive on your resume!).

Now there are many moon maps available to use (I probably already own most of them) and I know that everybody has their own favorite. We will be talking about a lot of the different maps and atlases out there in the months to come, but for most of the things we are going to be talking about in this column there really is only one map to consider Antonin Rukl’s Atlas of the Moon. Why? Because it is the best there is. Period. If you have stunningly clear skies, very well aligned optics and good skill at lunar observing, you may be able to see features that are not on Rukl’s charts (I have done it with my 8-inch), but 99% of the time everything you see will be on those charts. There is just something about the way the charts are drawn that make them very easy to use, but it does take practice. Luckily Sky Publishing has reprinted this invaluable lunar observing aid. It should definitely be on your gift list this year. Continued Page two

Hi all you crazy star gazers. . There were about a dozen members present February 3rd, at the monthly meeting held at the observatory at Rudy Park. Todd Ullery gave a very nice presentation, complete with pictures on several celestial bodies including but not limited to Saturn, Gemini, Taurus and Orion. In below photo Todd Ullery points out storms on the planet Saturn.

Todd also brought us up to date on the state of the planetarium. It appears that the schools are considering selling the building where the planetarium is to the LIU (Lincoln Intermediate Unit) which makes our destiny as of now unknown at this point in time.

Brad gave a presentation on nebulae, clusters, etc. and challenged the membership to find different heavenly bodies, including Messier objects. I know this challenge will be put on hold for me until warmer weather comes around. I am truly a warm weather observer. But please don’t let my cold bloodedness stop you from taking on the challenge right away. The winter skies are so much clearer that the “thick atmosphere” skies that come along with the summer.

We had two new members in attendance – a big welcome to Jay and Patricia Nelson and Joseph Allulis. Welcome to our new members and it was great to get to talk a bit with Jay and Joseph at the meeting.

An item that must be brought up is the state of membership dues. It was brought to our attention at the meeting that there are quite a number of members that have not sent in their dues. We really need this to happen as soon as possible. We need to update the current membership roster and I really prefer to do this once instead of deleting names that have not paid their dues just to have to put them back on the membership list a week or two later. So, if you have not paid your dues yet please do so by sending your dues in to Chris Small. Or go to the Join YCAS page and pay dues online. It might be a good idea to write that check and slip it into the envelope right now while you’re thinking about it.

There’s not much to tell you this month since it’s too cold for bar-b-ques and the movie night was snowed out. I’m especially at a loss for words since I just wrote you all of you the first week of February.

I hope everyone enjoyed the snow we got this past weekend. Have a great Valentine’s day. Well, my friends, it’s time to say goodbye and keep your eyes on the skies………cc